This was an exciting Euroleague season with many surprises. Today we are going to review group stage and you will be able to see statistical leaders, best teams and the best players of the Euroleague regular season. This should be an interesting Euroleague Regular 2018/19 Season Review, so please check our thoughts here below.

So here we can see how the teams ended the regular season: 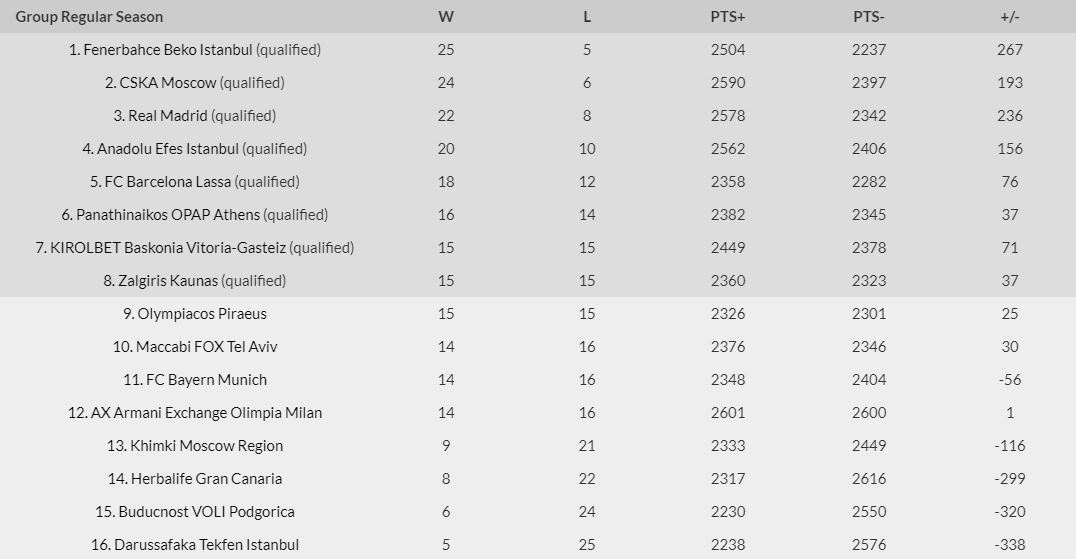 Surely, we do have clear leaders and clear outsiders. Matchups against 13-16 places were an easy win for most of the teams as these teams showed no signs of trying to win. If every other team lost to this quartet of teams, it was a huge disappointment for them as they were losing easy points in the standings.

On the other hand, we have clear leaders there. 1-5 seed teams were set for the playoffs and the only question was which team will be on a higher position. As we see Fenerbahce was the best team in the regular season as they lost only 5 games and most of these losses were at the end of the regular season when the result did not really matter for them.

And then we have middle seeds. Matchups between 6-12 seeds were the most interesting ones as these teams fought for the spot in the playoffs until their last game. 3 teams had 14 wins and other 3 teams had 15 wins by the end of the group stage. So only 3 teams were lucky to jump to these final spots and they had the best shape when it mattered the most.

This season we witnessed a historical event. Zalgiris Kaunas managed to reach the final playoffs spot. This fact would not be incredible at all if you did not know how they reached it. After the 23rd round, Zalgiris only had 9 wins and was tied with Khimki sharing 12th place. But then, win after win, they won 6 games in a row and all other results went their way and following that, Kaunas reached their second straight playoffs. This was an amazing treat for Zalgiris fans and players, this run will be remembered for a long time.

The best team in scored points was Olimpia Milan. They averaged 87.3ppg but as we saw, the best offense does not guaranty you a spot in the playoffs. One spot below them was CSKA Moscow with 86.8ppg. Then we have Real Madrid (85.9ppg), Anadolu Efes (85.4ppg) and Fenerbachce (84.3ppg) respectively. The thing that binds these team is that they all are great 3-points shooters. It looks like the playstyle of American basketball, little by little, is coming to Europe.

The best-assisting team was Real Madrid. They averaged almost 20apg and this really helped them to climb on the 3rd place of the standings. The runner-up in assists was Anadolu Efes. They were right behind Real as Efes averaged 19.9apg and they made 2 assists less in total. So we can say that these two teams were the best assisting teams last season.

Once again, Real Madrid was the best rebounding team this season. They averaged almost 37rpg. Surprisingly, in the 2nd place, we have Maccabi Tel Aviv with 36.3rpg. Then we have Olympiacos with almost 36rpg, but as we saw this did not help them to reach the playoffs.

Mike James of Olimpia Milan was unstoppable. He averaged 19.8ppg and led the league in this category. Brandon Davies of Zalgiris Kaunas averaged 14.4ppg and led his team to the playoffs. Another player of Milan — Vladimir Micov averaged 13.9ppg and Jordan Mickey (Khimki) averaged 14.2ppg. Interesting thing is that in the 1st four of best scorers, we don’t have a player who played in Final Four. This, probably shows us that basketball is not an individual sport.

The absolute leader of this category this season was Nick Calathes. He averaged 8.9apg and was an offensive maestro for Panathinaikos Athens. Below him, we have an already familiar face — Mike James. Mike averaged 6.37apg and led his team not only in points but in assists as well. Vasilje Micic of Anadolu Efes was 3rd with 5.5apg. With his passing skill, he led his team all the way to the Final.

Vincent Poirier of Baskonia was simply rebounding juggernaut. He averaged 8.0rpg and led his team to the playoffs. Then we have Nikola Milutinov from Olympiacos Piraeus who averaged 7.9rpg. Will Clyburn was 3rd in this category. He averaged 7.1rpg and with his toughness and physical skills, Clyburn managed to lead his team to the championship.

The MVP of the regular season was Jan Vesely of Fenerbahce Istanbul. He was fantastic all year long and managed to lead his team to win the regular season. He averaged 22.1 PIR, 12.5ppg, 5.4rpg, 1.5stlpg and was great on every facet of the game.

So it was a great regular season. Thank you for reading and please, be ready and check our page every day, because Euroleague’s playoff review is coming soon!

Article Image is taken from https://www.euroleaguebasketball.net/euroleague-basketball/news/i/6t74py47vpaqpt68/euroleague-and-eurocup-competition-structures-set-for-2016-17