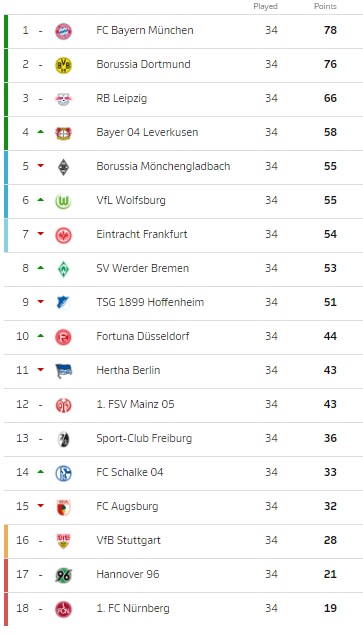 Bundesliga is one of the most interesting and skillful leagues in Europe and the World. There are borning lots of young talented with big perspectives and a bright future. Unfortunately, in Germany, there are not so many competitive teams that can compete with the Bayern Munich. This team has been dominating for a very long time in the Bundesliga and over the last 20 years has not won the Bundesliga only 6 times. Besides, they have become champions this year for the seventh time in a row.

This year, a lot of interesting and unpredictable things happened in the Bundesliga. As always, Bayern Munich fought to the very end for the championship crown and achieved it. There was a tougher fight for places that give tickets to Europe, where teams will be able to compare skills with the strongest teams from other countries. Each season offers us new talents, and the season 2018/19 is not an exception. We bring to your attention our thoughts about teams, players, tournament results in Bundesliga 2018/19 Season Preview and what can show us next year in Bundesliga 2019/20 Season.

Even after a bad start at the beginning of the season, Bayern Munich reached the first place and saved it. The Bavarians become the Champions of Bundesliga for the 7th time in a row. They had lots of troubles with injuries, however, teams bench players are good enough to replace and play well. As always, they played strong, confidently and fast football, with lots of goals, dangerous attacks and beautiful moments. FCB finished the season as most goals scored team and second by the best defense in the League. They lost only 4 times this year. Bayern Munich have a great experienced with young and perspective players combined team. Unfortunately, three Bayern legends will leave this summer for the next step in their careers. Franck Ribery, Arjen Robben, and Rafinha spent many years in Munich, took lots of trophies and reached big achievements. Each one deserves big respect for their desire to win everything in their path.

Second place in Bundesliga took Borussia Dortmund. This club is the most successful at growing young unbelievable talents. Lots of ex-Borussia players successfully playing in the top European clubs. They were at 1st place for half of the season, however, lack of experience and strength did not allow them to finish the season to the end in the first place. Every year this team fighting for the highest places in standings, although, their team is very young and it is very hard to achieve high results. Since the team is very young, their football is impulsive, fast, sometimes with mistakes, but as a result, it is very beautiful and intense. This year they already brought Thorgan Hazard (Borussia M’gladbach), Julian Brandt(Bayer Leverkusen) and Nico Schulz (TSG Hoffenheim) for money they got from Chelsea for Christian Pulisic.

RasenBallsport Leipzig is one of the youngest teams created in Europe and already reached very high results. They look stronger and stronger with every year. This year they already reached the 3rd place and qualified for the Champions League group stage only in the 9th year of their existence. The average age of the squad is 24 years. Red Bull made everything that was possible to win 5 leagues and play at the highest level against Bundesliga legends.

Bayern 04 Leverkusen, Borussia Monchengladbach, and VfL Wolfsburg played on the same level the whole season. However, last year the situation was much more dangerous especially for Wolfsburg as they finished the season at the 16th place and won in playoffs. Borussia also worked well on their mistakes and reached better results this season. Bayern Leverkusen reached Champions league place and will play next year in the biggest Europe’s tournament, while Foals and Wolves will fight in Europa League. Between these teams, there was an intrigue who will take the 4th place. All of them are very talented and we believe that next year they will be even stronger.

7th place of Bundesliga took Eintracht Frankfurt with 54 points. Next year they will start form UEFA Europa League qualification. They showed everyone that strong team-play can give big chances even playing against Grands like Internazionale. They reached the semifinal of Europa League, what took lots of strength. As a result, at the end of the season of Bundesliga, they failed to win in their last 6 games.

Union Berlin, FC Koln, and Paderborn will play in Bundesliga next year what is a very great achievement for clubs and their fans. These teams looked very strong in Bundesliga 2 and deserved a chance in the highest German League.

Unfortunately, VfB Stuttgart, Hannover 96 and 1. FC Nurnberg were relegated from Bundesliga and next year they will play in Bundesliga 2. Now, these teams are playing at the lowest level and need to improve their skills and correctly motivate their players for going back to Bundesliga.

Bundesliga and German football are very strong in attacking football, that’s because there were many strong goalscorers this season. Robert Lewandowski scored 22 goals this season and become the best one in the league. We can find him between the best goalscorers in Bundesliga for the 8th year in a row.

The best assister in Bundesliga become one of the youngest league players. Jadon Sanchez scored 12 goals and made 14 assists. After Robert Lewandowski, he is the second player in involved goals.

RasenBallsport Leipzig played the best defense this season and Peter Gulacsi made most clean sheets by saving the goals clean in almost 50% of the games. In total, Peter played 33 matches and saved 16 clean sheets this season in Bundesliga.

As we can see to compete with Bayern Munich is almost unreal. Borussia Dortmund made everything what was possible and changed 1 player for new 3, what can strongly affect their game. However, Bayern is preparing to smash the transfer window as 3 top team legends left the club. All teams need to be strong and prepare for a new season as hard as it is possible. Although there are 2 clubs dominance in Bundesliga, we can see big progress from the other teams. We expect strong football from RB Leipzig, as they are very near to the highest level. Also, Borussia Dortmund should be stronger and much more prepared for the end of the season next time. However, German Bundesliga is always very interesting and unpredictable league with lots of sensational results.