Very likely, that we will see the clash between strongest defensive and offensive teams in the African Cup of Nations Final. This time bookmakers giving the same odds on both teams. Algeria had stronger opponents on their way, so they can be much tired, however, that gives much more experience and confidence. Senegal looks like an impenetrable team saving clean sheet in 4 last games. We see here an effective game, as both teams have very talented attacking players from top European clubs. We expect over 2.0 total scored goals in this Final game of Africa Cup of Nations.

Senegal will face Algeria in the Final game of Africa Cup of Nations at Cairo International Stadium, in Egypt. Two most interesting and strong teams of Africa will face each other in one of the most exciting matches of the tournament. Both international squads made a very difficult path to the final. Most interesting, that these teams played in the same Group. In the second round of the Group stage, Algeria were stronger and won against Senegal with 1:0 result in an equal fight. To have more insights on this Senegal vs Algeria match please check out the preview below.

Senegal is a very interesting team with lots of talented players. They were one of the favorites to be in the final, and as we can see guesses were justified. In the 2018 year, they played 12 games including friendly matches, World Cup in Russia and Africa Cup of Nations qualification. Senegalians checked their tactics and tried to find their game before the Grand Tournament and lost only once against Croatia in a very equal fight by 2:1 in Osijek, Croatia. In the World Cup 2018 they lost only once to Colombia, however, that was enough to fail reaching the Playoffs. The Lions of Teranga won against Poland 2:1 and have drawn the game against Japan leading twice in the match.

During the Africa Cup of Nations, they faced troubles only in the first match against Madagascar as they have drawn with 2:2 result. Then, they won 4 games in a row without conceding any goals.

In the main Africa tournament, they conceded 1 goal and lost only to Algeria in the Round 2 of the group stage. This final could be a great chance of revenge, so should take to another level of responsibility and pride. In Playoffs Senegal triumphed against Uganda, Benin, and Tunisia with similar 1:0 results in all matches. However, they struggled to create dangerous chances, so they scored a very weak quantity of goals. The strongest part of their game is the defense. We can see that in 12 last games they conceded only 2 goals. For African football, that result is very unusual, as most of the teams like to play open, fast and width football. In general, this team stands out from other teams by their style of game, defensive abilities, and talented players.

Senegal Head Coach Aliou Cissé called only players from Europe. Most of them from France, Italy, and England, what shows a very professional level. Moreover, we can find players from Rennes, Everton, Napoli, Internazionale, and Liverpool. Idrissa Gana Gueye, Henri Saivet, M’Baye Niang, Ismaila Sarr and Sadio Mane (Captain) showing very strong skills during national breaks and playing for their clubs. They are the best proof of how African players can successfully play for the top European clubs. These players will be the key link playing for the victory in the match against Algeria. Unfortunately, Kalidou Koulibaly will miss the final game due to two yellow cards. 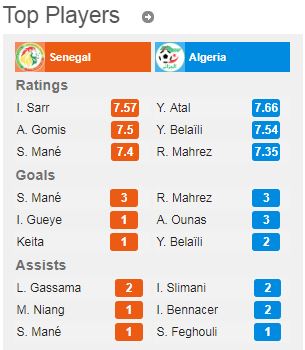 Algeria made a very difficult path to the Final of Africa Cup of Nations. They faced stronger opponents on their way than Senegal does. Algerians lost only 1 match since Qualification to ACN started and until now. Unfortunately, they lost their fourth qualification game against Benin, which played without suspended S. Sessegnon. The Greens finished first in Group D of qualification and repeated that result already in the main tournament. In the break between the qualification and the main tournament, they played 4 preparatory matches by winning 3 and having played 1 match in a draw. In general, Algerians lost once in their last 15 matches, what is a really impressive result.

If we compare, then, of course, we see more difference in defense and in the style of the game between the finalists. Algeria plays more dangerously, quickly and impulsively in the attack. They are more effective in the latest games, what we can see by the quantity of scored goals. Moreover, they play more confidently against stronger rivals, than Senegal met on their way. If Senegal met Uganda, Benin, and Tunisia in the Playoffs, Algeria met Guinea, Ivory Coast, and Nigeria. These rivals are much stronger, so the team laid out more power during the games and can be more tired.

Djamel Belmadi is a managing Algeria for a second year. Previously he managed Qatar and several clubs. He called lots of famous players to the Algeria national squad, but also several players from Algerian and Saudi Arabian leagues. Here we also can find most of the team members from France and England. The strongest side of the team is attacking and midfield areas. There is Riyad Mahrez, who snatched a very important victory in the semifinals against Nigeria at the 95th minute of the game. Adam Ounas is a 22 years old talent who already found himself in Napoli’s first team. Two very experienced and talented players Yacine Brahimi and Sofiane Feghouli will be the source of creativity in the team. In the attack, Islam Slimani, almost the most experienced Algeria National team’s member should be a target man in this important game.

These teams played last time in the group stage so we have a great chance to see Senegal’s revenge. Algeria won the last match against Senegal in the second round of Group stage three weeks ago. Both teams had chances to score, however, Algeria were more accurate and finally won the match scoring single match goal at the 49th minute. Most interesting, that everybody thought that Senegal is a strong favorite of the match giving high 4.30 odds for Algerian win. The previous match was pretty aggressive, as both teams received 4 yellow cards in total. Senegal can’t win against Algeria since 2008 World Cup qualification. In the last 5 games, only once Senegal took a draw, all other matches Algeria won.

Article image is taken from https://www.cafonline.com/total-africa-cup-of-nations/photos/galleries/senegal-vs-algeria-x6767