Milan Derby is always a very exciting event. They are fighting not only for 3 important points in Serie A but also for the honor of the club. Played match shows whose club is stronger in Milan at the moment. Inter looks much stronger in attack and confidently plays in the defence, however, the last match against Slavia Prague also showed lots of weaknesses. AC Milan struggling in the attack, however, showing great skills in defence. So we expect this match will be aggressive as always and finish with under 2.5 goals in total.

This weekend, we will witness another Della Madonnina derby AC Milan vs Inter. This will be the 4th Round of Italian Serie A, which will be held at Stadio Giuseppe Meazza. One of the most anticipated games of the season will be almost at the very beginning. We invite you to find out our thoughts about this interesting Serie A AC Milan vs Inter match, here below.

Since the teams play in the same stadium, for both it will be a home game. In the last game between these rivals, Inter defeated Milan with a 3:2 score. This match was most productive in recent 4 games, as with the same result last time Inter won against AC Milan in the 2017 year. Teams have already played Milan derbies 294 times in all possible tournaments, including unofficial games. It will be a great pleasure to watch this game and historical confrontation.

Milan started this season with struggles in the attack, however with a really confident game in the defence. They lost the opening round against Udinese finishing game without any shot on goal. This is a very weak result, knowing how this season is important for them after several seasons being only in 5th place or below. Marco Giampaolo changed Genaro Gattuso, who left the club with a very strong speech. It was really strange, as clubs showed even stronger and stronger results finding their game. Anyway, the new season started with a new manager, and they need to look forward to fighting for even higher positions in Serie A. 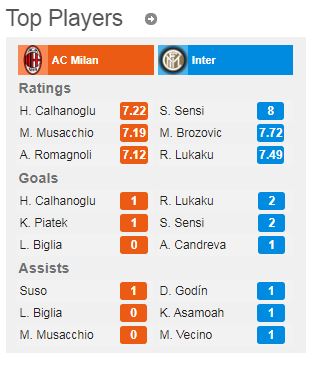 After a fail in the first round, the team recovered by winning against two outsiders of the major Italian league Verona and Brescia. At home, they looked very confident absolutely controlling the game, however, scored only 1 goal. At the 21st minute, Verona’s glaring mistake brought the team a red card. The home team sat in the defence, but Milan was able to roll 1 goal by penalty only in the middle of the second half. Being in the majority and having such a strong squad, Rossoneri should score more and play more dangerous.

Unfortunately, Mattia Caldara will miss the next game due to injury. Moreover, Davide Calabria will sit on tribunes due to red card suspension on the last minutes playing against Verona.

Inter started this season perfectly in Serie A. They have 3 straight wins and only one game with a conceded goal. Under also new coach Antonio Conte, who left Chelsea, looks like they have found the new style of game. Moreover, during this summer they called several very talented players to their squad like Romelu Lukaku, Valentino Lazaro, Diego Godin, Matteo Politano and loaned Alexis Sanchez from Manchester. At the moment they showing most confident and strong football and looks like they will compete this time with Napoli and of course Juventus for the top spot.

Even showing great form in Italy, Internazionale failed to win in the first match of UEFA Champions League against Slavia Prague. During the first half, they created more chances but failed to score. The second half was more aggressive and several players got yellows. At 63rd minute Olayinka scored netted the ball and led the game. Moreover, they had a dangerous moment to double the advantage. It seemed that for Inter the first match would be lost but in 2nd extra minute, Barella scored after a dangerous free-kick. In general, Inter had more chances to score in 4 additional minutes, than in the whole second half. This should be a strong lesson for Conte, to work other the ball control and middle of the mitch, as the main problem is there.

Statistics are taken from https://www.whoscored.com

Article image is taken from https://ghanasoccernet.com