Both teams are very young, talented and explosive. England can miss 7 players, as all of them will play in Champions League Final on 1st of May. The Netherlands showing very big progress in their last years and finally should succeed as most of the players are extremely motivated for fighting till the end and defend the honor of their country. We see very fast football in this match, lots of chances, mistakes, dangerous moments and obviously goals. We expect more than 2.5 goals in total here.

Netherlands will face England at Estádio D. Afonso Henriques, in Guimarães, in UEFA Nations League 2018/19 Finals. The Netherlands vs England is the match with big interest because of great National squads and great perspectives reaching the Final. About a month ago, we saw how Ajax played against Tottenham in Champions League Final. That is one of the best examples of how sometimes national teams are very similar to their clubs. Very young and talented Amsterdam Ajax played against London’s Tottenham and finally lost. We will see here a very interesting and tough game between two national teams with the most powerful young player’s academies. Review our thoughts on this match here below. 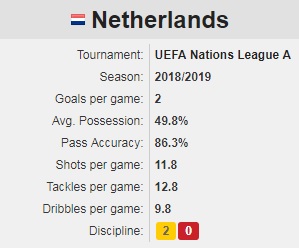 Previously the Netherlands failed to qualify to World Cup Championship. They took 3rd place in the group stage and did not get a chance to prove the worth. Their team looks strong and very perspective. Therefore, there can be no doubts that they have a very bright future as a team and as individual players. The Netherlands showed very progressive, interesting and confident football playing at home against France and Germany. They scored 5 goals and saved a clean sheet twice. However, the team obviously struggling in away matches as they lost to France and have drawn a game against Germany. In official matches, since the 2017 year at home Netherlands played 7 games. They won 6 and conceded only in two games. In Euro 2020 qualification Germany won against Oranges with 3:2 and made not long waited for the revenge.

Ronald Koeman joined the team in 2018 and we already can see great results. He brought very young, interesting and perspective players which can gain more practice and show their abilities in these important games. The most experienced team with 62 caps is Daley Blind, which playing the best season of his career. There are two Liverpool players, which will play in the Champions League Final on 1st of May, so they will have only 5 days to prepare for another big match. Virgil van Dijk and Georginio Wijnaldum are very important for Liverpool and Netherlands as well. Very surprising, that Virgil is already 27 years old, however, he played only 26 caps for the national team. Koeman will prepare a squad, which knows English football well, so that could be a strong advantage for them. 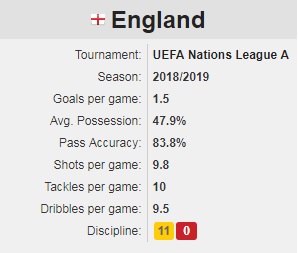 England national team made very big progress since their last achievements in International tournaments. Unfortunately, they lost the Playoffs for 3rd place in the World Cup in Russia, however, their football was very strong and confident during the competition. Later, they lost against Spain in the first Round of UEFA Nations League, however, in the second match they took revenge and finished 1st in the group stage. The Three Lions won 6 of their 7 last games in all competitions.

Gareth Southgate and the squad, in general, is one of the youngest squads in Europe. Goalkeeper Tom Heaton is the oldest one with 33 years of age. Kyle Walker and Fabian Delph are 29 years old and all other players are much younger. Only Jadon Sancho playing outside England, since all other playings in Domestic League. Even 7 players will play in Champions League final, what can strongly effect teams game. Unfortunately, someone will not be in the main lineup, due to physical conditions.

Last time, these teams played an official match in far 1996 year in Europe Championship. Last year they played a friendly game, where England won at Johan Cruijff Arena, in Amsterdam.

Article image is taken from https://playingfor90.com/2018/03/24/england-player-ratings-lingard-target-win-netherlands/5/