Both teams are fully prepared and extremely interested in winning Champions League trophy. Liverpool played already last year in the Final against Real Madrid, however, lost due to goalkeepers fails. This time they back with one of the best savers in the World and looks like they are ready to smash Tottenham. Spurs also made a very hard and difficult path reaching this stage. They must give all their strength and play the best football for their whole career. We will see the most interesting season's game with Liverpool as Winners in the end.

Tottenham will face Liverpool at Wanda Metropolitano, in Madrid, in the Champions League Final. Tottenham vs Liverpool is the match with big interest, especially during this season, their positions in Premier League and also in Europe’s Champions League. This season, both English teams have been at a very difficult path on the way to the Final. After losing first legs against their Semi-final opponents, both teams made incredible and unpredictable comebacks. The clubs fought every second of the game and eventually achieved their goals. For Tottenham, this is one of the greatest achievements in the history of the club. For Liverpool, this is a chance to snatch victory in the second Final in a row in the Champions League. Review our thoughts on this Tottenham vs Liverpool match here below.

Tottenham Hotspurs had a very hard and interesting season with ups and downs. Even failing the end of the season, they reached season goals. They took 4th place in Premier League and will play in Champions League next season. Moreover, Spurs won against Manchester City in Semi-finals of CL and reach the final, where will play against PL vice-Champions Liverpool. At the season’s end, they lost 5 of their last 10 games (four games with same 1:0 result). Tottenham had a very tough distance when they played City 3 times in 11 days. Even more, they played without several main squad players, that even more complicate their situation. Although they lost to Citizens twice, they won the main game and knocked them out form Champions League.

Of course, when at the end of the season the main squad players are injured, it is hard to find a quality substitute. Especially when a team has to play at the highest level, the club has to sacrifice something. In the case of Tottenham, it was 3rd place in the Premier League. Finally, the team can enjoy a game at their own stadium. The building has been completed, and almost half of the season Spurs played at beloved and long-awaited stadium.

In Premier League Harry Kane scored 17 goals and made 4 assists. Son Heung-min scored 12 and made 6 assists. Christian Eriksen was involved also in 20 goals, scoring 8 and 12 assists. It is very nice to see the team playing at the highest level, which did not spend hundreds of millions on new players. A lot of players grew up in the club’s academy or came in very early. Mauricio Pochettino has done a great job over the past few years and has achieved high results. Of course, to compete in all championships, the team need to have a large enough and good reserve of players. However, Tottenham is doing well now, what should make the club’s management happy.

Liverpool this year look very confidently as in Premier League, same in Champions League. They reached the Final of CL after knocking out Barcelona after 3:0 lost at Camp Nou. This result should be written in the Champions League books as one of the biggest Barca tactical and mental fails. Of course, Liverpool also was unbelievably strong a great. The desire to win, self-reliance, tactics of Jürgen Klopp and the bad game of Barcelona gave Liverpool what they wanted. This is a good chance to correct what was done last year. Over the past few years, the reds have achieved incredible results and are playing super football, not worse than Manchester City for sure. Liverpool won 9 of the last 10 matches in the Premier League. They made everything to catch up with Manchester City, but they also made no mistakes at the end of the season.

Jürgen Klopp has a curse not to win the finals, but we believe that it will be destroyed on the 1st of May. Earlier or after, this coach achieves his results, which we see now and have seen with Dortmund Borussia. He became a real 12 player on the field and the players are pleased with both the leader and the coach. At the moment, the team does not require additional changes, as there are very talented and skilled players with the necessary abilities and motivation.

For the last 2 seasons, the team has sold and acquired very good players. Almost each of them has its place in the line-up and plays quality football. Alisson, Naby Keita, Xherdan Shaqiri and Fabinho joined Reds in last summer transfer window. This almost totally changed the middle of the pitch, and still, have weaknesses and gaps to solve.

This season these teams met already twice in regular Premier League season. Both times Liverpool won with the same result 2:1. In both games, Reds were more dangerous and realized their moments. At the beginning of the season, they probably had no idea that they would meet in the Champions League Final. In 4 of their 5 matches, both teams scored and games finished with more than 2.5 goals.

Tottenham Hotspurs will play the Final game without main squad leader. Unfortunately, Harry Kane will miss this game due to Ligament Injury and Harry Winks due to Groin Surgery. We should mention the Lucas Moura and Heung-min Son, as both of these players dragged the team on themselves when it seemed that winning was no longer possible. Both Korean and Brazilian deserve great respect for their aspiration and leadership at the right moment. Lucas Moura scored a very important hattrick against Ajax, which called the greatest moment in his career.

The Red’s trio – Mohamed Salah, Sadio Mane and Roberto Firmino were involved in 87 goals together in Premier League and Champions League combined. Most interesting, that defensive backs Trent Alexander-Arnold and Andrew Robertson made 28 assists together in a total of both competitions. And in general, their back played very great football this season with Virgil van Dijk as a leading defensive person. Next game will miss only Naby Keita due to Groin Injury. 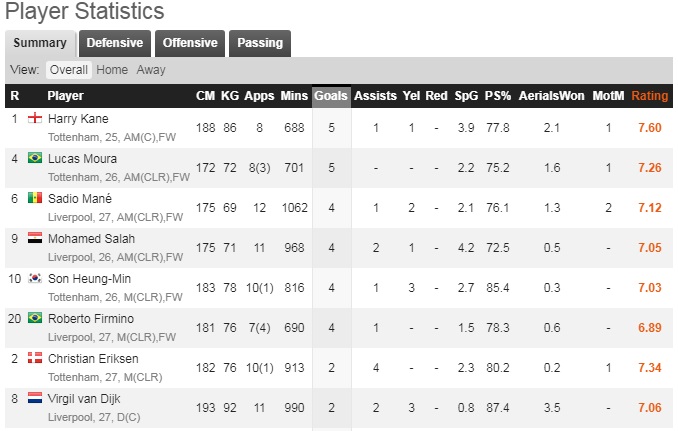 Article image is taken from https://www.telegraph.co.uk/football/2018/09/15/tottenham-vs-liverpool-premier-league-live-score-updates/