Playing at San Siro Internazionale will have one of the biggest support in Europe. They are very strong playing at home ground and should prepare well facing very interesting and perspective Borussia Dortmund. After lost against Juventus, Inter should be very motivated, especially knowing bad situation in Champions League group F. Wee see them favorites of the game. Internazionale should win this game or at least take a draw, so we chosing Inter Milan 0.0 Asian Handicap.

Inter vs Borussia Dortmund will be one of the most exciting games of Champions League Group F, which will be held at Stadio Giuseppe Meazza (San Siro), in Milan. Two extremely strong teams will face each other fighting for the place in CL main draw. Will Internazionale take first win against Germans? Or Dortmund will continue their unbeaten streak? Read our thoughts about this interesting UEFA Champions League Inter vs Borussia Dortmund match, here below.

In Serie A Inter Milan started this season as well as it was possible. They lost only once against their constant Serie A rivals Juventus and gave them 1st place. At the moment Inter stands at second place with 1  point behind present champions. In the 8 last games of Italy’s Serie A, Internazionale won 7 and showed a really strong defense. They scored in a total of 18 goals and conceded only 7 as well as Cagliari, Verona, and Juventus. However, best defense so far showing Udinese with only 6 goals conceded in Serie A. After big changes in squad and management of Inter, the team started to show long-waited football. The unbeaten streak gave lots of belief in a great club future after several very questionable seasons. 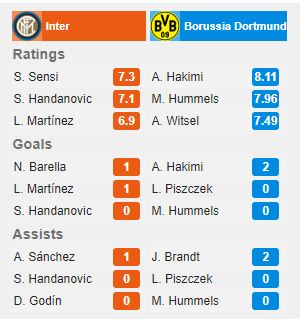 In Champions League Inter struggling, since they have failed to win both matches. They lost against Barcelona and played draw with Slavia Prague, so the next game against Borussia should be very important. After several weak matches against Barcelona, Juventus, and Sassuolo, they need to come back to their best football, which they showed at the beginning of the season.

Unfortunately, Alexis Sanchez, Danilo D’Ambrosio and Stefano Sensi will miss the next match due to injuries.

Borussia Dortmund also shows great results in German Bundesliga. At the moment they have 15 points and stand at 4th place only 1 point behind 1st. In Germany this year we see very strong competition between even 9 clubs since between 1st and 9th place there is only 2 points difference. Dortmund this season lost only once in Bundesliga surprisingly against Union Berlin. However, they even won Super Cup at the beginning against Bayern Munich. Yellow Blacks have a great opportunity this year to fight for the title once again as they built a very strong and confident squad with lots of strengths. They show once of the strongest attacks, however, one of the weakest defenses among best Bundesliga teams.

In Champions League, Dortmund stands at 1st place with better goal difference than Barcelona. They won over the Slavia Prague and played 0:0 draw with Barcelona, what is a very strong result and great achievement for defenders.

Best team striker Paco Alcacer and Mario Gotze will miss the next game due to injuries. 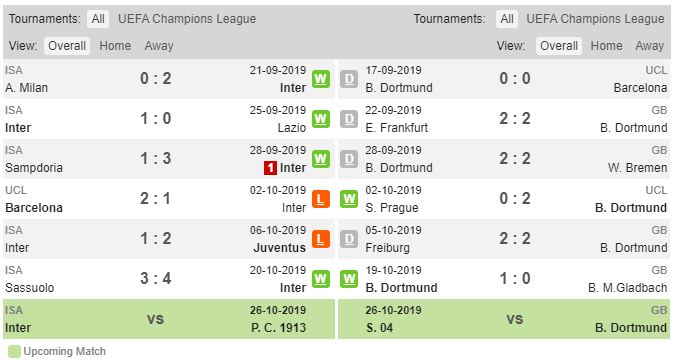 Article image is taken from https://scroll.in