Even playing without several important players, Chelsea should be strong favorites before meeting the oldest team of Premier League. Blues took lots of mental energy from the win over the Ajax, so at the moment they are on the psychological wave. Moreover, this could be the 7th straight win if they win against Burnley. This year, hosts showed also very strong football, especially at home ground, as they won 3 out of 4 games at home. However, Chelsea's win looks very confidently here.

Burnley vs Chelsea will be a very intriguing and interesting 10th Premier League Round match, which will be held at Turf Moor, in Burnley. One of the most perspective and young teams in Europe will face absolutely British team Burnley, which shows very strong football at home ground. Is Chelsea prepared to take 7th straight win in different competitions, or Burnley will stop Frank Lampard’s side? One of the youngest teams will play against the oldest one, with average of 28.9 years. Read our thoughts about this exciting Premier League Burnley vs Chelsea match here below.

Burnley is one of the most surprising teams this season so far. Strongly build a team with great defensive abilities. They had much more time to prepare and rest before meeting the London Blues. So this could be their superiority against Chelsea for this time. At the moment, the Clarets stand at 8th place in Premier League 5 points behind Chelsea. Hosts won 3, lost 3 and dre 3 matches so far this season. All 3 wins have been taken playing at home ground. Moreover, in all won games, Burnley saved the clean sheet and lost only to Vice-Champions Liverpool. 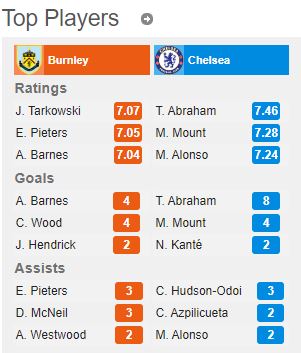 During the last game in PL, playing against Leicester, Burnley lost even being in front after Wood’s goal at the 26th minute of the game. However, that only angered Foxes, as this year they play extremely beautiful football and are possible to win over almost every opponent in PL. Vardy equalized the score at the end of the first half and Tielemans decided who will be the winner at 74th minute netting the ball after Barnes pass. In general, Burnley showed a very strong character even playing away games. They created lots of attacks, however, they lost the possession and match in total.

Unfortunately, very likely that Danny Drinkwater will miss this match against Chelsea due to injury. This player is loaned from London to Burnley until the end of this season.

Chelsea after a questionable start with Frank Lampard seems like found the right tactic of the game. The team won 6th in a row win in different competitions, what shows their motivation and character. In Premier League, Blues stand at 4th place with 17 points. That is far from the best result. However, knowing that this is one of the youngest teams in PL, they still have time to reach the peak and gain experience. After failing in at the beginning of the season, they get back the reputation and stand on the winning path under the great Frank Lampard motivational coaching.

The last match was very important for guests. First of all, Chelsea won second game in UEFA Champions League after surprising lost over Valencia and took the leading place in Group H. Secondly, they won over the Semi-finalist of the previous CL year in Amsterdam. Thirdly, Chelsea were first-team which won over the Ajax at Johan Cruijff Arena. And most importantly, they saved a clean sheet against one of the most dangerous attacking teams which last time failed to score at home ground a long time ago. So in general, this win gave lost of mental strengths, internal forces, and common achievements. This should unite the team very much in order to achieve even better results.

Ruben Loftus-Cheek, Antonio Rudiger and Marco van Ginkel will miss the next game due to injuries.

Article image is taken from https://www.standard.co.uk/

Statistics are taken from https://www.whoscored.com/